Lord of the Rings

Lord of The Rings Parade with pictures taken by Elsa

I was excited to go to this as I had seen many of the sets round Wellington and Upper Hutt. 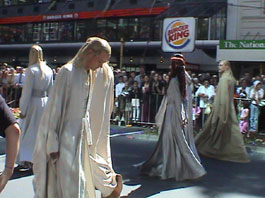 My daughter Hannah was only 7 months old, so a lot of planning went into getting a prime-viewing site, the parade was at 3.30pm in the middle of Wellington. Hannah and I set out to drive into town at 10.30am. There were a lot of people about considering the parade didn’t start for another 5 hours!! By 11.45am people were already starting to sit against the barriers that they had in place and the crowds of people never let up till it was over. Where I was standing the crowd was at least 4 or 5 people deep.

The atmosphere was one of excitement and anticipation, then we heard the shout go up – they were coming! Everyone started leaning forward to try and get the first glimpse of the parade. The photos tell the rest of the story so enjoy viewing them.