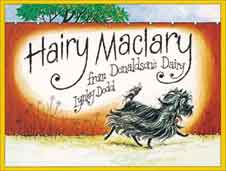 Synopsis
Hairy Maclary from Donaldson’s Dairy is a cumulative story of a group of dogs who follow the mischievous Hairy Maclary to trot around the town. Six dogs have joined the group when they meet Scarface Claw “the toughest Tom in town” who chases them back home.
Back to top

Text Evaluation
The first sentence has the tapping rhythm of a small dog trotting. The rhythm and rhyme of the other dogs’ names keep the story moving like a pack of eagerly sniffing and exploring  dogs:“Hercules Morse as big as a horse, Bottomley Potts covered in spots.” Sometimes there is an onomatopoeic quality to the words, “off with a yowl, a wail and a howl” which make it fun to hear out loud and paint a vivid picture in the listener’s head.  The rhyming, skipping quality of the text stops abruptly when Scarface Claw appears. The words “SCARFACE CLAW, the toughest Tom in own” are not bouncy and are much more emphatic with the alliteration of the harsh “T” sound. This is well suited to the action of the story at this point and Scarface Claw’s character.

The text seems very simple. It has just over two hundred words and many of those are repetitions, but it tells a complete story with a beginning, middle and end. It also has suspense just before the dogs see Scarface Claw, “when suddenly, out of the shadows they saw...” and the page has to be turned to find out who they see. This suspense is mirrored in the illustrations. Hairy Maclary at the front can see Scarface Claw’s eyes shining in the dark but the other dogs are blissfully unaware and are busy sniffing “at the smells”.

The idea that six dogs could be scared away by one cat is humorous to children. It is a reversal from the usual idea of dogs scaring cats.  Size is an important theme in this book because it is not necessarily the biggest who are most powerful. This is a message that children love to hear! Hairy Maclary is small but Hercules Morse who is pictured as large, and is also described “as big as a horse” will follow him. The other dogs are no braver than Hariy Maclary when they are faced with Scarface Claw. They are even shown a long way ahead of Hairy Maclary as they run away – but maybe this is because Hairy Maclary was further ahead or the other dogs can run faster. Hairy Maclary can be seen as an antihero. He ends up chased back to bed after his jaunty start, but the book also says that whatever scary and unexpected events befall you, you can always go back home and be safe.

The rhyming descriptive names of the dogs also bring humor into the story. There is an old English sheepdog, Muffin McLay who is like a bundle of hay or the greyhound Blitzer Malony who is all skinny and bony. These names also act a mnemonic device that allow children to quickly learn and say the names as they are repeated.

I read this book to my children when they were younger than one year old. Sometimes, at that age, they did not have the patience for the many repetitions of the dogs’ names. By the time Schnitzel von Krumm appears and five other dogs names have to be repeated, they often wanted the action to move on. So sometimes I skipped the repetitions and introduced each dog once so the pages could be turned more quickly. Older children enjoy the repetitions and especially enjoy being able to supply the last words in a name.
Back to top

Evaluation of Illustrations
Sutherland (1997) states that a picture book’s illustrations are to “support or extend the author’s text” (page 115). The illustrations in Hairy Maclary From Donaldson’s Dairy do both. They support the text by showing the animals how we expect to see them from the text. Bottomley Potts is covered in Spots. Schnitzel von Krumm does have a very low tum. The illustrations also extend the text by the details of the animals’ expressions and the backgrounds. Like real dogs these dogs show their feelings with their whole bodies. As they set off on their walk their ears are forward, their eyes are bright and their tails are waving. When they are running away their whole bodies show their terror. The illustrations and text are both quirky and jaunty; they trip along with the story. Young readers who know dogs will smile just to see the dogs acting so much like dogs and laugh to see the cat win.

The illustrations are lively and bright without being garish. The backgrounds are fairly flat while the lines depicting the animals show the different textures of their fur. Hairy Maclary and Muffin McLay do look shaggy and tangled while you can see the sheen on the smooth coated Bottomley Potts and Bitzer Maloney. The backgrounds are fairly detailed at the beginning as the dogs trot along, enjoying themselves. When Scarface Claw appears and the dogs run away the backgrounds are very simple and even blank when Hairy Maclary is in his basket. This has the effect of emphasising the frantic action in the last part of the book.

In most of the illustrations the dogs are moving towards the right, usually trotting in a satisfied way. This gives the effect that the dogs are moving into the story and moving the story ahead. Each dog appears in the illustration as his name is stated in the text, then he goes off to the right. When the dog is off the page he is still in the story and is represented by the end of his tail. The tails are cumulative like the words, as all the dogs’ tails eventually appear at the right in a line. Hairy Maclary  has already left the page to create mischief so his tail is not represented at the right. An observant small child (starting at around two or three) can delight in identifying the dogs from the tails, for example the spotty tail for Bottomley Potts the Dalmation is easy to pick out.

On each page that it says “and Hairy Maclary from Donaldson’s Dairy” Hairy Maclary is not trotting forward, instead he is always very busy doing a dog activity:he sniffs at a lamp post, he chases some birds, he pokes in a trash can. After he meets Scarface Claw this changes and on the page he gets to himself he madly dashing away from Scarface Claw with the other dogs a long way ahead of him.

The action of the story changes abruptly when Scarface Claw appears and looks straight out of the book at the reader, unlike the dogs who look forward into the book. Scarface Claw’s body language stops the forward movement of the dogs and focuses all the reader’s attention on him. He looks bigger than the dogs. He is drawn on a larger scale than the dogs, even though he is a cat who is smaller (except not smaller than Schnitzel Von Krumm perhaps). On the second page that shows Scarface Claw the reader sees only his yowling, hissing face surrounded by green lines. He is scary! And on the next page we see the dogs galloping off to the left. They have lost their satisfied, jaunty air and are now racing with tails between their legs and glances over their shoulders. They are heading back into the safety of the book instead of out into the story and the world.

These illustrations are detailed and fairly busy, but as I said my children were happy to have this book read to them at less than one year old. For a more general audience it might be more suitable for ages two and up. An even older reader can also notice details like the differences in the houses the dogs live in or the way that the numbers on the letterboxes go down. In some ways the simple text of this book is suitable for a younger audience than the detailed illustrations. The other books in this series develop Hairy Maclary’s character more and have more complex stories. Hairy Maclary is always mischievous and always scared of Scarface Claw. Scarface Claw appears in three more Hairy Maclary books and he was given a book of his own in 2002 called simply Scarface Claw.
Back to top

Other Points
This is definitely a book that can be “read” by a prereader who looks only at the pictures. A child can follow the sequence of more and more dogs joining the group then the scary cat appearing and all the dogs running away and finally Hairy Maclary being safe in his bed.

One thing about this book that an American reader may miss is that a dairy refers to a corner store in New Zealand. Hairy Maclary lives behind a corner store, not on a farm for milking cows. That is why he goes out on a suburban street for his adventures and not into the country.  (The observant reader can also see two Ds for Donaldson's and Dairy on the shop window above Hariy Maclary’s head on the first page.)
Back to top

Conclusions
Hairy Maclary is a book that can be enjoyed by a child on their own but reaches its full potential when a child, a lap and an attentive adult meet. Its rhythmic text is a treat for the ears even before the children can understand all the words. I think it is text that can be read by request for the seventeenth time in one day without bringing on a brain hemorrhage in an adult  (but adult tastes and patience vary, of course). The text can be quickly learned by adult and child. They can read together as the adult says, “Hairy Maclary from...” and the child provides some approximation of “Donaldson’s Dairy”. These are not easy words to say or read, but they make sense in the context of the story.
It is hard to look at Hairy Maclary From Donaldson’s Dairy without also thinking about the other books about this dog. This book and character are more memorable for being developed further. This book stands on it’s own as a book that children will enjoy for its fun qualities and for its message that being big doesn’t always mean you are more powerful. I think children will really fall in love with Hairy Maclary once they enjoy all the other books about him.
Back to top